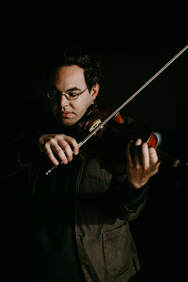 In addition to classical viola, Hueso freelances and records in multiple genres as a violinist, guitarist, & electric bassist; he has been a guest soloist with the rock band Kansas in 2011 for their Symphony Tour, has performed with Placido Domingo, rock band Disturbed, members of Mariachi Vargas de Tecalitclán & Nuevo Tecalitclán, tribute groups commemorating artists such as Otis Redding, and has collaborated with a number of up-and-coming pop and country artists, lending his skills as both a composer and studio musician.  In addition to keeping a rigorous teaching and freelancing schedule, Hueso enjoys arranging, improvising and performing chamber music with his colleagues from Atlanta, San Diego, and Puerto Rico Symphonies.﻿